Mark Champkins studied Manufacturing Engineering at Churchill College, Cambridge and Industrial Design Engineering at the Royal College of Art (RCA). He has designed and launched over fifty of his own products, selling over half a million units. Mark is a fellow of the Royal Society for the encouragement of Arts, Manufacturers and Commerce and an industry advisor to Cambridge University’s Engineering Department, providing input on course structure and content for the undergraduate tripos.

Throughout his career he has endeavoured to create engaging products that have social or educational value.

Whilst at the RCA he won British Inventor of the Year, for designing Self-Heating Crockery, a range of plates, cups and bowls that heat up to sixty degrees at the touch of a button. The crockery will keep warm for 30 minutes, and can be recharged and reused over and over by simply being washed in hot water or cleaned in a dishwasher. Initially designed for use in the NHS to help reduce food wastage, the crockery featured on Tomorrow’s World and then in a partnership with Wedgwood, become more refined for home use.

On graduating, Mark worked at the RCA’s research dept on a 12 month project to investigate how good design could improve standards of education in the UK. During his research, he spotted an opportunity to collaborate with teachers and pupils create products that help enhance concentration in lessons. Capitalising on the research, in 2004 he started Concentrate Design to design and manufacture products to help pupils concentrate whilst in lessons.

From 2005-7 he collaborated with Professor Joshua Silver to design ‘Adspecs’, spectacles with liquid-filled lenses whose prescription can be changed. These are for distribution for areas in sub-saharan Africa where one in three children need sight correction, and often are unable to properly engage in the education system as a result.

In 2007, Mark pitched the Concentrate on BBC Dragons’ Den, winning investment of £100’000 from Peter Jones. The products launched in John Lewis the same year and now sell through retailers across the UK and Europe. Mark has designed, developed and launched over a dozen Concentrate products.

In 2011, Mark was appointed the as the first ever “Inventor in Residence” at the Science Museum in London. The aim of the residency is to create products and inventions, inspired by the Museum Collections, that spark an interest in Science, Design and Engineering, often incorporating intriguing scientific phenomena or ideas. You can learn more about the products produced for the Science Museum by clicking here. During his time at the Museum he was also commissioned to design gifts for Professor Stephen Hawking and Her Majesty The Queen.

For over a decade Mark has been working as a design consultant, taking on projects for clients that require a little lateral thinking. Client projects have varied from generating product ideas at brainstorming workshops, to 18 month projects to develop a product from an idea, through all the stages ready for a market launch.

In 2016, Mark started as Design Director at Kano Computing and was responsible for developing a new range of connected products for kids that would enable the company to grow. During his tenure at the company Mark was responsible for a refresh of the Kano Computer, incorporating a new LED ring, and creating the Kano Computer Complete Kit. He and the design team (Bruno Schillinger, Ricardo Luz and Sherif Maktabi) also developed three new Kano Kits, a Camera, a Pixel Display and a Smart Speaker, along with five USB sensors. The kits launched on kickstarter raising $643’000 & led to a successful series B funding round. Fast Company recently ranked Kano as the second most innovative consumer electronics company in the world after Apple and before Google and Microsoft(!).

Mark is an occasional contributor to television and radio speaking on the subjects of innovation, enterprise and invention.  His credits include; BBC Horizon, BBC News 24, BBC World Service and The Today Program (Radio 4). A showreel can be viewed by clicking here, and the YouTube and Soundcloud logos lead to a collection of recordings.
.

In 2011, for a bit of fun Mark wrote a ‘Christmas Stocking Filler’ book with Harper Collins about famous people and celebrities that have patented inventions. If you’d like to learn more click here 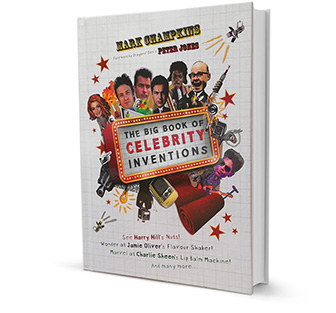 In 2016 Mark was invited to give a TEDx LONDON talk at the Science Museum alongside fellow speakers Professor Stephen Hawking, comedian Al Murray and musician Talvin Singh (amongst others). The talk entitled ‘Everyone Should Invent’ can be viewed below.

“All of our days are numbered, we cannot afford to be idle.
To act on a bad idea is better than not acting at all…because the worth of an idea never becomes apparent until you act on it.
Sometimes the idea can be the smallest thing on the world. A little flame that you hunch over and cup with your hand, and pray will not be extinguished by the storm that howls about it.
If you can hold on to that flame, great things can be constructed around it, that are massive and powerful and world-changing.
… All held up by the tiniest of ideas.” – Nick Cave